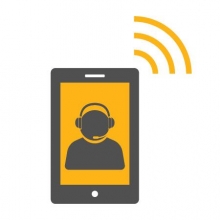 Americans receive 4.8 million robocalls a year, but what if they didn’t have to be interrupted by them? Georgia Tech researchers developed a virtual assistant that screens calls to block 97 percent of scammers.

Currently, people rely on blacklist apps to stop spam calls, but they are only up to 60 percent effective, according to School of Computer Science Ph.D. student Sharbani Pandit. This is because of the prominence of neighbor spoofing, or numbers similar to person’s own.

“The caller number will look very similar to your own number, so you’re more likely to pick up, and each time they call, they use a new number, so it doesn’t show on the blacklist,” said Pandit.

So Pandit and her team tried a more direct approach, a virtual assistant (VA). Like a smart home device or a secretary, the VA determines whether calls are from people before it passes the call off to the user.

Whether a call is spam or not can be determined by a simple question: does the caller know the name of the person they’re calling?

“The idea is someone who is a wanted caller would know the full name of the person they’re trying to reach,” Pandit said.

If the caller can confirm the name, the VA would forward the call and a transcript of how the conversation went to the user. The entire interaction takes 10 seconds.

For callers who may not know the name but are not a bot, VA engages in a conversation and interrupts the caller as they are speaking to determine if the caller stops talking. This process takes a maximum of 30 seconds.

“It’s very natural in human conversation that you would stop to listen to what the other party is saying on the call, but a bot wouldn’t do that,” Pandit said.

For calls thought to be spam, the notification would be sent to the user with a label for each caller to indicate whether it was a human or a robot caller.

How Many Calls It Stops

The researchers did a user study with 21 people who determined they were comfortable talking to the VA. They also tested the VA on a database 8,000 robocall recordings, in which 97.8 percent of the robocalls were correctly labeled as such.

Pandit presented the research in Fighting Voice Spam with a Virtual Assistant Prototype. She co-wrote the paper with University of Georgia’s Jienan Liu and Associate Professor Roberto Perdisci, and SCS Professor Mustaque Ahamad.  The work has already garnered media attention from New Scientist and Digital Trends.

The researchers are still making a few adjustments before they release the Android app. Robocalls are constantly evolving and getting more sophisticated, which introduces new challenges to researchers. Some robocalls even have lists of phone numbers and names, so the researchers are adding more questions in the screening conversation that only a human could answer.

They believe that anything that can slow down the efficacy of robocalls will be a benefit.

“The goal of robocalls is to make as many calls as possible to target victims and make a profit from it, but as security researchers, if we can add hurdles in their step, then sometimes the cost isn’t worth it for the attacker,” said Pandit.