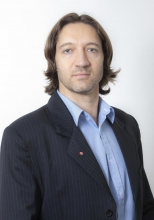 Freedom has always been Alexey Tumanov’s main goal. Creative freedom. Intellectual freedom. Freedom to self-actualize. Whatever choice will give him the most autonomy is how he’s made his biggest life decisions: coming to the US, getting into computer science, pursuing his Ph.D., and joining the School of Computer Science at Georgia Tech.

Growing up in Kiev, Ukraine, Tumanov was forged by the rigorous curriculum of the physics and mathematics specialized high school he attended, as well as the country’s emerging emphasis on business and entrepreneurship. He envisioned starting and running companies at as young as 12.

Tumanov also had a creative streak. When he was 15, he made his first computer game. It was a multi-genre game that combined puzzles, quests, and accurate modeling of gravitational forces as the player dodged monsters and searched for treasure.

He was searching for something: a career path that combined his business acumen with his technical skills and creative tendencies, so he turned his attention and aspirations to the United States. “To spread my wings, I needed more room, more opportunities, a meritocratic community,” he said.

After writing a college essay on the importance of self-actualization, Tumanov was accepted to a private university in North Carolina. Tumanov quickly realized that hard work would be rewarded and having a more academic foundation could give him a boost in the industry. He double majored in computer science and math, and was just short of a triple major in business administration at the time of his graduation.

“I’ve always been very freedom seeking and freedom loving, and I liked the fact I could carve out my own path in North America,” he said. “I was relying almost exclusively on my own skill set, the invaluable mentorship of my teachers, and unconditional family support. It was liberating to be immersed in an environment where, with hard work and perseverance, everything seemed possible. I suppose I was on my way toward the American dream.”

After graduating, Tumanov took a job in the industry as a software developer, but eventually decided that his academic aspirations and intellectual curiosity couldn’t stop at master’s. He craved innovation and working on the frontier of computer science and distributed systems.

“In the industry, you are in the business of creating value for your customers, which is more about the efficiency of execution,” he said. “In academia, you get to pursue higher-risk, longer-term projects with potentially higher reward and broader impact.”

Trailblazing in Systems and ML

Tumanov initially discovered he could flex his creativity in research when he pursued his master of computer science at York University in Toronto. There, he became aware of his passion for the systems research he does today. He started in the virtual reality field, but found himself focusing on the distributed systems aspect.

“I was always trying to get to the bottom of how and why things work, and if you apply this mentality to computer science, you inevitably try to figure why the operating system works the way it works, and the more you want to learn about this, you get to lower-level systems,” he said. “I’ve always been a systems person, but I just didn’t know about it.”

With this new specialization, Tumanov transitioned to a full-time research assistant position in virtualization technologies at University of Toronto and eventually applied to Ph.D. programs. The Snowflock project he was involved in and extended recently won a EuroSys Test of Time paper award for its innovative approach to abstracting the virtual memory fork to cloning virtual machines in seconds. With this research foundation, he went on to pursue his Ph.D. at Carnegie Mellon.

Tumanov wanted to find a programming language that could express resource constraints as algebra and therefore run more efficiently. The work increased the value and utility of cluster computing and won the EuroSys Best Student Paper award in 2016.

Although Tumanov was making his mark in the systems world, he knew machine learning (ML) would be the next frontier. He did his post-doctoral fellowship at the University of California, Berkeley, to research and develop a microkernel-like distributed system for next-generation artificial intelligence applications and frameworks

“What truly excites me is trailblazing,” he said. “I’m really interested in working on new creative ideas with impact potential.”

Tumanov now brings this entrepreneurial spirit to Georgia Tech, where he researches building better systems for ML. As a member of ML@GT, Tumanov already forged collaborations with a number of faculty members in the College of Computing to make ML more accessible by enabling the middleware to choose the best models for ML application developers.

“The goal is to democratize ML,” he said. “We want to alleviate the cognitive burden of worrying about specializing a model and the costs of using it for an application. We want to lower the barrier to entry for AI application developers.”

He views his teaching in the same way. He sought freedom through education as a student, and now he wants to provide those same opportunities to his students.

“I want my research and teaching to be broadly impactful,” he said. “I want to democratize knowledge.”