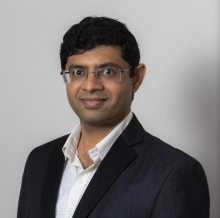 Imagine a cup that could tell what beverage was poured into it before someone drank it. Such an invention could be revolutionary for tracking glucose for people with diabetes and for anyone who wishes to keep a tab on their diet.

This isn’t fantasy. It’s the future thanks to wireless sensing technology.

This is the kind of research that drives Ashutosh Dhekne, a new assistant professor in the School of Computer Science. He focuses on wireless networking, mobile computing, embedded systems, and the Internet of Things (IoT). A cup like this combines all four areas.

The idea for the cup derives from the concept of light refraction. For example, a spoon placed in a cup will look bent because of refraction. The same principle applies to wireless signals, according to Dhekne. When going through a liquid, wireless signals slow down. The extent of slow-down is specific to every liquid, enabling researchers to identify the type of liquid.

“Wi-Fi has advantages over light because Wi-Fi penetrates various substances that light cannot and reacts very differently with wireless signals,” Dhekne said. “By using wireless signals, we can even distinguish between Coca-Cola and Pepsi.”

This isn’t just a novelty trick, but could have very practical applications, from scanning liquids in airport security to finding contaminated beverages.

On the Cutting Edge

Dhekne has always pursued practical projects. As the son of a computer teacher, he started working with computers at age 8 using them to program graphics. A computer science and engineering degree was a natural fit when he was an undergraduate at Pune University. A master’s and Ph.D. seemed like the right next step because he enjoyed boundary-pushing research more than working on applications.

“With research, you’re always on the cutting edge,” Dhekne said. “You’re essentially trying to expand the human knowledge of a certain area.”

After a more traditional background in algorithms as an undergraduate, Dhekne switched to networking in his master’s at the Indian Institute of Technology Bombay then took a few years to work in industry to determine if it was the right research area for him. At a wireless-router start-up, he found the intersection between IoT and wireless computing systems and the broad subject of his Ph.D.

“This fading boundary between systems and networking is where the edge is,” he said.

He moved to the U.S. for his Ph.D. at University of Illinois at Urbana-Champaign, where he studied the possibilities of using wireless signals as a sensing mechanism in addition to communication.

The Possibilities of Networking

Dhekne started working on the sensing cup during this period, but he also has several other highly useful research projects in the areas of wireless communications such as mobile streaming and localization. The latter can be seen in research on using wireless sensing to track firefighters in a compromised building. He posits a drone could be used to locate each firefighter, saving lives and resources.

Yet, these concepts could also be applied to more everyday activities such as interactive grocery shopping lists that can locate a customer in the store and suggest the fastest navigation path, or even navigating complicated buildings like hospitals or museums.

His passion for these pragmatic projects is something he hopes to pass on to his students. Since graduate school, he has appreciated how explaining a concept has deepened his knowledge of it and helped him see its multiple uses.

“There is a delight in seeing that students are improving on a day-to-day basis,” he said. “They’re learning something new and can now create an impact on the world on their own.”