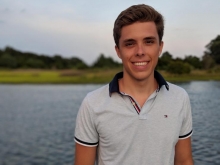 College of Computing student Ángel (Alex) Cabrera has won the Love Family Foundation Scholarship. The annual award recognizes an undergraduate with outstanding scholastic record and is the highest honor Georgia Tech can give to a graduating student.

This year associate and assistant deans from the six colleges awarded the $10,000 scholarship from the Gay and Erksine Love Foundation to both Cabrera and Scheller College of Business student Meredith Wolpert. Cabrera is a Stamps President’s Scholar and has been a campus leader, dedicated student, and ambitious researcher with an eye for practical problems.

Cabrera — who was also recently awarded the 2019 National Science Foundation Graduate Research Fellowship — has pursued challenging projects since he started as a computer science student in 2015. In his first years, he led the software team for the PROX-1 satellite, a student project scheduled to launch on the SpaceX Falcon Heavy. He also worked as a campus tour guide and organized the 2017 Stamps Scholars National Convention.

Cabrera also pursued his interest in computer science outside of the classroom by interning at Google the past three summers. The internships gave him the opportunity to work on difficult real-world problems, such as building an analytics dashboard to monitor errors in Google Maps, designing an anomaly detection system for Google’s data processing pipelines, and working on new car features for the next generation of Android Auto.

“I really enjoyed working on this huge data system that improves the map millions of people use every day,” he said.

While Cabrera liked his software engineering internships, he was most passionate about the research portion of the work. He decided to pursue research directly during his junior year, when he became one of the few undergraduates in the Polo Club of Data Science, a research group run by School of Computational Science and Engineering Associate Professor Polo Chau.

“I was immediately impressed by the leadership and academic achievements he had already accomplished,” Chau said. “I recruited him to join my research group right away.”

Cabrera’s first project with the lab was working to help people better understand deep learning models for image classification. He and his co-authors presented their work, Interactive Classification for Deep Learning Interpretation, as a demo at the premier computer vision conference, Computer Vision and Pattern Recognition 2018.

The research group also introduced Cabrera to one of the biggest challenges machine learning (ML) faces: equity and fairness. With Chau and School of Computer Science Assistant Professor Jamie Morgenstern, Cabrera is working on techniques to aid users in discovering algorithmic bias, a problem in which ML models encode or enforce societal biases by treating different demographic groups disparately.

Using Morgenstern’s knowledge of theory and Chau’s interactive visualization expertise, the group created an algorithm and visual interface to help developers audit ML models for intersectional bias. The research has been accepted to the Debugging Machine Learning Models workshop at the upcoming Seventh International Conference on Learning Representations in May.

“ML models are marketed as being more fair and just, but in reality, they are often trained on biased data, and models can even worsen existing biases,” Cabrera said. “My goal is to create usable tools for fairness that can help developers discover these issues”

Throughout his internships and projects, Cabrera has maintained a 4.0 GPA and worked as a teaching assistant for CS1332 - Data Structures and Algorithms during three semesters.

“Alex does an amazing job as a TA. He has exceptional knowledge of the course content and programming in Java,” said Mary Hudachek-Buswell, College of Computing lecturer and Cabrera’s supervisor. “He’s highly regarded by all and is a wonderful mentor to many of the students.”

He will continue his research this fall as an incoming Ph.D. student in the Human Computer Interaction Institute at Carnegie Mellon University.