School of Computer Science Researchers Innovate on the Edge of Computing 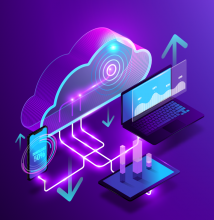 The future of computing is on the edge. The cloud allows the development of complex applications but has its limitations. Video processing, image recognition, and other computation need a closer server for improved latency, security, and cost. School of Computer Science researchers are leveraging existing devices at the edge of the network, a practice known as fog or edge computing.

To understand why the edge is so innovative, one must understand the understand the history of networks. “For a long time, we would compute on our own machines that were owned by one organization,” said Professor Ellen Zegura. “What’s so revolutionary about the cloud is it allows access to the process in a much more accessible, cheaper, and widely used way.” But what if the cloud is too far or access is intermittent? This is where edge computing comes in because it allows computation to be spread on existing mobile devices.

Relying on the edge

The two biggest issues with this effort are breaking the computing down into transitive pieces and then ensuring they return. Networking Professors Mostafa Ammar and Zegura predict the churn of devices and how reliable the network will be. They have been attacking this problem from multiple angles, such as using mobile servers and femtoclouds. The latter is a mobile self-configuring cloud made from a cluster of mobile devices that provides a reliable compute service despite the churn of its devices.

Edge computing offers a lot of performance advantages, but there are challenges when harnessing a distributed network. One of the strengths of the cloud is its reliability, but ensuring multiple edge nodes also have this reliability is more complicated. Professor Umakishore Ramachandran approaches the edge from a systems angle.

His research ensures that if one node loses power, the computation isn’t lost, but also it isn’t distributed so far that latency suffers. One of the ways he’s working on improving the resilience of the edge is through Georgia Tech’s campus security camera network. He believes anomaly detection could be done in real-time if nodes tracked all vehicles and set a time bound on their activities. Ultimately, Georgia Tech Police wouldn’t need to save all video and could respond faster because the edge nodes could process the footage for threats faster.

Securing data is another benefit of edge computing. As a systems researcher, Associate Professor Ada Gavrilovska realized all the edge’s advantages for scalability and latency wouldn’t matter if data weren’t secure. However, securing the edge in the same way as the cloud made it too slow, so she and Research Scientist Ketan Bhardwaj built an edge security solution that uses a security feature in commodity hardware. Once a user can trust the edge, they can put critical services there, such as security for Internet of Things (IoT) devices. “I want to use the edge to make these applications faster, more scalable, and more efficient in how they use resources,” she said.

SCS professors are only just scratching the surface of how revolutionary edge computing could be. The edge can bring computing everywhere, from ensuring self-driving cars have the most up-to-date information to keeping communities connected to the network during a natural disaster. “The vision of edge computing is limited; they say it’s a slave to the cloud, but the story is more compelling than that,” said Ramachandran. “It’s about creating a level playing field and having autonomy on the edge for decision-making.”