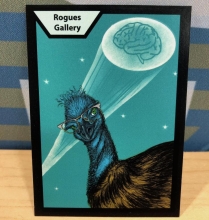 Some of the most unique computers in the world are housed in the Rogues Galley, a collection of uncommon architectures hosted by Georgia Tech’s Center for Research into Novel Computing Hierarchies (CRNCH). Last September, the gallery received its first member, the Emu Chick, and this year CRNCH researchers have made considerable progress programming the Chick to the benefit of CRNCH and their industry partner, Emu Technology.

The Emu Chick is an eight-node system housed in a tower case that is designed to move computation to data, providing sufficient memory and storage bandwidth for common data analysis applications. Having new architectures like the Emu Chick in the Rogues Gallery allows academics, students, and industry professionals the opportunity to collaborate on hardware.

Working with this early release hardware has led to a strong partnership with Emu Technologies as students and researchers have learned how to use the machine effectively. Researchers submitted more than 15 bug requests related to Emu simulation framework, toolchain, and hardware execution. These requests allowed Emu to fix multiple bugs, improving the Emu toolchain and system’s performance and stability. “Students’ creativity and persistence in running their codes with each agile iteration of both hardware and toolchain enabled Emu to test a far wider range of issues than we could have been able to develop and test on our own, resulting in Emu developing better bug diagnosis tools and delivering complete fixes,” said Emu Chief Operating Officer Martin Deneroff.

Yet this relationship was mutually beneficial to Tech, too. Emu and Tech collaborated on using the prototype to enhance Institute development priorities for irregular applications, tensor decomposition, and other applications. For many students, this was also the first time they were able to work directly with industry. “The Rogues Gallery gives researchers the opportunity to test their ideas on unique platforms and get actual results at larger scale,” said computer architecture Ph.D. student Cameron Braun. Students get the rare opportunity to work with industry leaders also interested in the hardware, such as the researcher from Sandia National Laboratories who became Braun’s mentor and later offered him a summer internship.

For alumnus Eric Hein, Emu started off as a way to experiment with the coolest computers and eventually led to his first job after he finished his Ph.D. in spring 2018. Everything with the Chick was new and different, including how Hein started thinking about his approach to architecture. “Several weird aspects of the architecture like automatic thread migrations and hardware indexing modes forced me to rethink the way I wrote code from the ground up, reading between the lines to reason about how each decision would influence the behavior of the system,” he said.

Hein got so good at thinking about the Emu programming model that he became a technical resource for Chick users at Tech and beyond, eventually creating a custom STREAM implementation that can handle memory errors and scale to a large number of threads. This work led to a full-time position at Emu, where he understands the architecture as well as its developers but can relate to it from a user perspective. Such a partnership wouldn’t have been possible without his work with the Rogues Gallery.  “If it weren't for CRNCH, I might never have heard of Emu,” he said.

Industry leaders are also recognizing the value of merging academic researchers with emerging technologies. In fall 2017, CRNCH met with Sandia researchers to discuss a Kokkos Cilk backend for running Kokkos on the Emu system. This discussion influenced a new partnership between Sandia and School of Computational Science and Engineering Professor Umit Catalyurek and School of Computer Science Research Scientist Jeff Young in 2018. These partnerships can also exist outside of the Rogues Gallery, such as with recent National Science Foundation funding for a project led by CRNCH Co-Director Vivek Sarkar and Emu founder Peter Kogge that is focused on migrating thread architectures and asynchronous task models for graph analytics applications.

Emu and CRNCH’s partnership has given every participant a competitive advantage. ”The ability to tap into technically strong researchers who are grounded in hands-on experience with our product, coupled with the strong industry partnerships Tech engages in, gives Emu an immediate leg up as we do on-going market research related to product requirements to address market problems that are only just beginning to emerge,” said Anne Vincenti, Emu’s vice president of marketing.

Emu is just the first successful partnership for CRNCH. Field programmable gate arrays (FPGAs) with stacked memory, neuromorphic devices, and other unique hardware are being added to the Rogues Gallery, and CRNCH is always looking for more collaborators. For more information on the Rogues Gallery and on related Emu work, please see the Rogues Gallery page and Emu’s site.