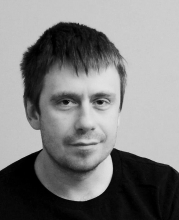 Blockchain has become one of the biggest buzzwords in security these days with the rise of Bitcoin. In this transaction method, everyone knows all of your information — from how much is in your account to where it’s going — in every step. Without the transparency, the whole system breaks down. But what if you want your information more protected?

Secure computation solves this by giving users encrypted wallets that acknowledge there is money inside without saying how much. Everyone can verify there is sufficient money to fund a transaction, but nobody knows how much you had, how much you paid, or how much you have now.

This type of cryptography is the main interest of new Associate Professor Vlad Kolesnikov, who joined the School of Computer Science in January. But it’s about more than just financial transactions.

“You want to compute the function on data owned by several principals, but you also want to never reveal their private inputs,” he says. This can apply to everything from sensitive government information to healthcare data. For example, a pharmaceutical company may want to search a medical database to create a new drug, but it would need to hide its search queries to stay competitive.

From Belarus to Blockchain

Although he liked tinkering with computers growing up in Belarus, they were not easily accessible.

“You had one hour of screen time, so you had to think what you were going to do,” Kolesnikov says.

When Kolesnikov went to college to study computer science, his approach was also intentional. He wanted to study something that impacted a broader audience than just theory. Cryptography wasn’t nearly as popular as it is now during his Ph.D. at University of Toronto, yet he was interested in the intersection of computer science and mathematical logic inherent to the field.

Every major computing field has a security risk that could be better protected using cryptography, from big data to bioinformatics.  The bridging of the topics works in the other direction, too. For example, using programming languages techniques has the potential to significantly improve performance of general secure computation.

During 11 years as a cryptography researcher at Bell Labs, Kolesnikov valued working with student interns, but there were limitations to how much they could be involved. He was searching for a livelier environment where he would have better access to students and found it at Tech.

Kolesnikov hasn’t even had to leave his office to meet them because Tech students come to his door. He can engage with more students interested in cryptography when he teaches a graduate seminar next fall and a cryptocurrencies class next spring.

Kolesnikov’s approach to teaching is to make sure students really engage with what they are learning. This is also how he approaches his research.

“You solve problems by understanding how things work — not by facts.”