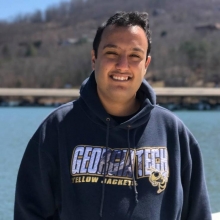 Getting an internship at Google is already a challenge, but getting a fellowship is almost impossible. Yet, fourth-year Georgia Tech School of Computer Science (SCS) Ph.D. student Ahmed Saeed ­– Google’s newest fellow – has met the challenge and done the impossible.

The application process for a Google fellowship is rigorous. Although Saeed interned at Google for two summers, it didn’t guarantee the success of his application. First, an applicant must be nominated by a professor and vetted by a College of Computing committee. Then, they must submit three recommendation letters, a transcript, a curriculum vitae, and an eight-page research proposal.

Tech recommends only two students, and just 30 students receive the fellowship each year. Saeed was awarded the fellowship in systems and networking starting fall 2017, and is the second SCS student to be selected.

“To each project he brings curiosity and a commitment to high quality research contributions. He is on a path to great success.”

Like many fellowships, Google’s pays for tuition and fees and provides a stipend. However, unlike some other programs, there are no strings attached. For three years, Saeed will have the opportunity to research whatever he’s interested in with resources, funding, and encouragement from his Google mentor – software engineer Nandita Dukkipati – whom he video chats with every two weeks. There is no expectation a fellow will work for the company after. “It’s not a recruitment program,” Saeed said. “They’re trying to fund people with promise.”

Saeed has always been interested in systems, but the fellowship gives him the freedom to focus his studies on packet scheduling for data centers, which he first started working on during his Google internships.

Packets are the basic unit of computation between two nodes on a network. The problem is how to allocate network resources for multiple users efficiently. In his fellowship proposal, Saeed divided his research by each year:

In late August, Saeed traveled to Mountain View, California, to meet the other fellows and attend candid sessions with Google employees.

“All the students that got the fellowship are working on cutting-edge stuff,” he said. “They’re all pretty accomplished, so meeting them, seeing what they’re working on and the questions they’re trying to answer – both on a technical and personal level – was insightful. It helped me steer my thinking better.”

Saeed believes the fellowship and Georgia Tech complement each other well. “At both, I get a lot of freedom to explore, make mistakes, and learn from them.”