Creating the Next Code Composers 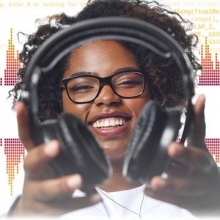 “If I hadn’t taken the course, I would have never figured out that I had a passion for this,” says Nylah Julmice, a computer science major at Georgia Tech.

Julmice was an Atlanta high school student and musician when she enrolled in a class called “Music Tech,” which she thought was a music theory course. She showed up the first day only to find out it was a class in programming, a subject that had always felt inaccessible to her.

“It seemed complex, something that was impossible and out of reach. Especially since there aren’t a lot of females in this industry.”

But Music Tech was an EarSketch class, so there was plenty of music to be made. The inclusion of music in the curriculum was ultimately what piqued her interest. “It was something that made sense. It made me really fascinated by the whole idea of computer science.”

It turned out that Julmice had a passion for both code and music. She completed her EarSkech class and began to study more coding languages on her own.

She signed up for AP Computer Science and began to see the field as a potential career path. “I enjoyed the puzzle, trying to figure out how things worked.”

Read the Full Story:
Creating the Next Code Composers