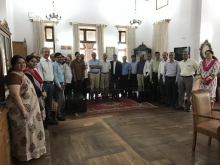 Georgia Tech School of Computer Science Professor Shamkant Navathe graduated from India’s University of Pune with a degree in physics a long time ago. This year, he’s advising his alma mater on revising its computer science program as a part of the national effort on curriculum innovation.

Pune started its computer science program before most state universities in India and had an excellent graduate curriculum in the 1990s, but the degree hasn’t changed much since then. At one point, it was a very respected program in a thriving educational center, but as key faculty left throughout the years, the curriculum started to fall behind.

“This is a problem across all of the universities,” Navathe said. “The students are getting piecemeal teaching and are not being motivated enough. The curriculum seems fragmented with too much emphasis just on final exams.”

With nearly 250,000 students enrolled in state university undergraduate computer science programs annually, this is a growing problem for India. However, under Prime Minister Narendra Modi’s new education program managed by Ministry of Human Resource Development, the Curriculum Innovation Initiative (CII, known by its Hindi acronym RUSA in India) is working to assess, update, and standardize state university undergraduate and post-graduate curricula across the country.

Through a mutual friend, Navathe met Professor Venkatesh Kumar, the director of the technology group for CII. Kumar asked if Navathe would be an outside advisor on the computer science curriculum overhaul. Even though Navathe has been at the Georgia Tech since 1990, his work in the field is widely known in India. In fact, his textbook, Fundamentals of Database Systems, is used as a standard text in most universities in the country.

In late August, Navathe took the 26-hour trip to India for eight days. There, an internal advisor, Professor Hema Murthy, joined him. Murthy is a computational science and engineering professor from the Indian Institute of Technology (IIT) in Madras.

India has three types of universities: state, deemed, and autonomous (like IITs). While the state university curriculum is approved by the government, deemed universities are part of the state system but allowed to award their own degrees. In contrast, IITs are autonomous public universities that are considered the gold standard of computer science education because of their rigorous entrance exams with admission rate below 1 percent, competitive curriculum, and emphasis on external internships. Georgia Tech has faculty members and Ph.D. students who studied at IITs. Since they’re independent, IIT curriculum can evolve along with educational and industry standards without getting bogged down in government bureaucracy other universities must. Navathe said that the outside perspective from the IITs could give a fresh take on the problems facing state university computer science education, which have been increasing for decades.

India has at least 363 state universities, so CII has chosen different institutions for different subjects. For computer science, they focused on Pune and Anna University in Chennai. Navathe and Murthy met with faculty, department chairs, and deans at both universities to learn about the problems of the curriculum and offer solutions. One evident issue is that the courses and labs are being taught separately and by different professors. “We wanted to bring a more integrated experience for the students,” said Navathe.

Combining courses and labs may streamline the curriculum, but it also puts more pressure on the professors. Navathe and Murthy anticipated this issue and recommended the universities add teaching assistants to supplement the work and lead discussion sections to motivate students. They also suggested taking advantage of already existing online courses for credit.

Right now, they have only made their recommendations, but Kumar will bring their work to the CII and later to the planning commission at the Central Government for resource allocation. Then Navathe plans to return in December to look at the specific plans for how their recommendations will be implemented. They will also meet with students to get their opinion. The goal is to roll out the new curriculum on a test-basis by July at Pune and Anna. The hope is to eventually extrapolate it to all state universities.

The chance to benefit his home country is what drew Navathe to the project in the first place. “This is something I can do for India,” Navathe said. “What we do at a state level can have an impact on the masses."