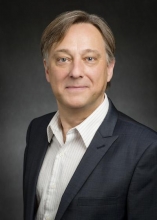 The School of Interactive Computing (IC) has hired three new faculty members to join its staff, two of whom will arrive on campus in time for the Spring 2018 semester.

Among the three is renowned roboticist Seth Hutchinson, who will be KUKA Chair for Robotics, a title last held by Adjunct Professor Henrik Christensen.

“Seth is an incredibly talented researcher and professor,” IC interim chair Amy Bruckman said. “His wealth of experience will be an invaluable asset to our students and faculty.”

The KUKA Chair for Robotics was established in 2006 by a $1.5 million grant from KUKA Robotics, a North American subsidiary of KUKA Roboter GmbH and a global leader in robot manufacturing. Christensen, who was the inaugural KUKA Chair, held the position from 2006-2016.

Hutchinson will also be an associate director of the Institute for Robotics and Intelligent Machines (IRIM).

“I am delighted that Seth will be joining IRIM as an associate director,” IRIM Director Magnus Egerstedt said. “Seth brings with him technical sophistication and creativity, a passion for robotics research and education, and a highly compelling vision for the future of robotics. I look forward to him joining our Georgia Tech robotics family.”

Prior to accepting a position at the Georgia Tech, Hutchinson spent nearly his entire career at the University of Illinois at Urbana-Champaign. He began his time there in 1990 as an assistant professor in electrical and computer engineering, advancing to associate professor in 1996 and full professor in 2003. During that time, he also served as a visiting professor at a number of international posts.

He co-authored two books on the topic: Principles of Robot Motion – Theory, Algorithms, and Implementations and Robot Modeling and Control. He also served as editor-in-chief of IEEE Transactions on Robotics from 2008-13.

Hutchinson received his education at Purdue University, earning his bachelor’s, master’s, and Ph.D. in electrical engineering from the school in 1983, 1984, and 1988, respectively.

Hutchinson will begin at Tech in January 2018.

Sauvik Das and Matthew Gombolay have also joined IC’s faculty ranks. The latter will begin in January 2018, while Gombolay will arrive on campus in time for the Fall 2018 semester. Das, who completed his Ph.D. this year at the University of California, Berkeley, studies human-computer interaction, data science, and cybersecurity. Gombolay, who earned his Ph.D. this year from the Massachusetts Institute of Technology, researches robotics, artificial intelligence and machine learning, and human-robot interaction.