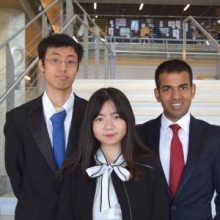 Now in its fifteenth year, the Imagine Cup challenges student developers to use Microsoft platforms to create innovative software solutions. Competitors must first advance from of their national competitions before qualifying for the global contest.

Oculogx competed against 54 other finalist teams over a two-day period before making it to a final group of four teams. The Georgia Tech team Oculogx finished behind Team X.GLU from the Czech Republic and ahead of the third and fourth place teams from Argentina and Canada.

The Georgia Tech team built a mixed reality warehouse navigation app using HoloLens and Microsoft Azure that increases efficiency by making it easier for workers to find items quickly. The team earned $25,000 and $25,000 in credits toward a Microsoft Azure subscription for its second-place finish.

Oculogx competed earlier in the year for the 2017 Georgia Tech Inventure Prize as PickAR. Oculogx is also a startup company and was founded by industrial and systems engineering student Charu Thomas. They specialize in augmented reality software solutions for other businesses.