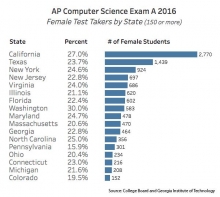 According to recently released analysis from the Georgia Institute of Technology, 54,379 students took the Advanced Placement (AP) Computer Science (CS) A exam in the United States in 2016, which sets a new record.

This is a 17.3 percent increase over the previous year and great news said Barbara Ericson, director of computing outreach for the Institute for Computing Education (ICE) at Georgia Tech.

“In 2012 fewer than 25,000 students took the exam. So, more than doubling in five years is pretty good growth,” said Ericson.

Despite positive overall growth however, a closer loook at the data reveals mixed results for 2016.

While the number of female high school students taking the AP CS A exam last year increased by 25 percent over 2015, females still only account for 23 percent of exam takers. In eight states fewer than 10 females took the exam. Mississippi and Montana had no females take the exam.

Take an interactive look at female test takers by state

The number of African American students taking the AP CS A exam also increased by 14 percent this year, but the overall pass rate for these students decreased from 38 percent in the previous year to 33 percent in 2016. The top five states for the percentage of African Americans taking the exam in 2016 were: the District of Columbia, Maryland, Georgia, Oklahoma, and Louisiana. Nearly half of all states had less than 10 black students take the AP CS A exam.

Hispanic participation in the exam grew by 46 percent in 2016 with 6,256 students taking the test. The pass rate for this group increased just one percentage point to 42 percent during the same period. The top five states for the percentage of Hispanic students taking the exam were: New Mexico, Florida, Texas, Wyoming, and California. In all, 15 states had fewer than 10 Hispanics take the exam.

“We’ve had positive overall growth, but we are still way below where we should be in general and especially for underrepresented groups,” said Ericson. “We need to be where AP calculus is, which had nearly 300,000 students taking the course this year.”

To move the needle forward on this goal, Ericson said more qualified teachers are needed. “The biggest bottleneck right now to achieving more participation and more diversity is that there are not nearly enough trained educators who can effectively teach and prepare students to succeed on the AP CS A exam,” said Ericson.

Examine the complete results of the 2016 analysis

Although she doesn’t see an immediate solution to the problem, Ericson is optimistic that the new AP CSP (computer science principles) course launched this year by the College Board will help bring more qualified teachers to the table. With more of a focus on problem solving, creativity, and the impact of computing innovations, the CSP course is primarily intended for non-CS majors.

“Along with paving the way for more diversity in the A course,” said Ericson, “CSP is an easier place for teachers to get started if they don’t have any prior experience. We’ve developed several free interactive e-books intended to help teachers, especially with programming because that’s the part they don’t know or are afraid of. Once they’ve mastered the CSP course, our hope is that they will move on to become qualified for the A course.”